Rep. Tom Delay turns himself in in Harris County, Texas

After the judge issued an arrest order for Delay, he turned himself in today.
Here's his mugshot, all laughing: 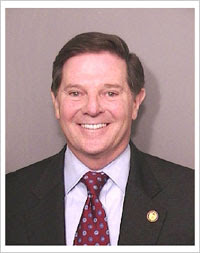 An old saying goes "He who laughs last..." Tom should think of that.

HOUSTON - U.S. Rep. Tom DeLay on Thursday turned himself in at the Harris County sheriff's bonding office, where he was photographed, fingerprinted and released on bond on state conspiracy and money laundering charges.

“He posted $10,000 bond and they have left the bonding office,” Lt. John Martin with the sheriff's department said.

DeLay, accompanied by his attorney, Dick DeGuerin, showed up about 12:15 p.m., appeared before a judge and was gone in less than 30 minutes, Martin said.

Yesterday Keith Olbermann took on the false terror alerts on his show "Countdown," on MSNBC. You can see the video of the broadcast at the Crooks & Liars website, and read the transcript at Keith Olbermann's blog.

While Keith Olbermann was great yesterday, I would like to point that Olbermann didn't exactly do all this research all by himself, and didn't credit his sources.

His article looks, almost verbatim, like a study we published in this very blog last year. TableTalker Biltud and I did this study of false terror alerts in the summer of 2004:

While I think it's great this story is finally getting some air time, and I certainly do enjoy and support his show, I think it's NOT FAIR that mainstream journalists take the work of bloggers without even a minimal credit or a miserable link to the source. It's becoming quite common for mainstream journalists to take the hard work of bloggers without crediting. After all, they have a name and a mainstream vehicle for their work; we bloggers have nothing but our dinky blogs. I think it's dishonest not to credit where you get a story, specially if said story is available for everyone with an Internet connection to see. If I did the opposite, it would be called plagiarism. It's been a non-written rule of blogging etiquette to at least mention the sources you use for a post or article. If only, for the huge amount of crap we endured for publishing that study.

Our own study of false terror alerts has been posted online since the Summer of 2004 for everyone to see. How easy it is to just appropriate that study, ripe for the picking. Maybe one of Keith Olbermann's interns thought he found a goldmine that could grant him/her a promotion; I don't know. I only know that it would have taken him only one sentence to mention where these studies of terror alerts first appeared... particularly when some of his 13 false terror alerts are taken almost word for word from our study.

Maybe if you email Olbermann to thank him for taking on this story, you may want to remind him that crediting his sources is the honorable thing to do: KOlbermann@msnbc.com

PS: Nevertheless, we do enjoy "Countdown" and Keith Olbermann's reporting. His show is definitely a breath of fresh air in the current panorama of cable broadcast news.
# Posted by Julius Civitatus @ 11:29 PM

Money laundering charges brought on against Delay.
Troubles keep piling up for the bugman:

AUSTIN, Texas (Reuters) - A Texas grand jury on Monday indicted U.S. Rep. Tom DeLay on two new charges including money laundering, following a conspiracy indictment last week which forced him to step aside as the second-ranking Republican in the U.S. House of Representatives.

The new indictment, for money laundering and conspiracy to commit money laundering, was issued shortly after DeLay's lawyers sought to dismiss the original charge on a legal technicality. (...)

Help Us Maintain This Site